Ultra Light Graphs, or ULG for short, is a tool that allows you to create basic graphs using nothing more than a few lines of text. The text format is designed to be meaningful in itself, which makes ULG a sort of markup language for graphs. It isn't intended to replace something more comprehensive like graphml or dot, but it does allow you to quickly write something that is readable in your favourite text editor and can be turned into an image that you might want to insert into documentation etc.

Installation can do be done using ruby gems:


ULG is very easy to use. Just give it a file with the text in it and it will generate a png by default.

Reads from stdin if no input FILE given


Right, lets say you want to draw a basic graph. You open up your favourite text editor such as vim. You want two nodes and an arrow, so you might intuitively type something like this:

Now, this is what ULG would make of just that one line:


Maybe you don't want two boxes. Perhaps you want one of them to be oval. That's easy too:

That would give you:


You've probably noticed that the arrow, or edge in graph-speak, doesn't have a label. We can give it one by just inserting some text somewhere inside the arrow:

This would give us:


You can also control the shape of the arrow head, for example:

This would result in this rather pretty graph: 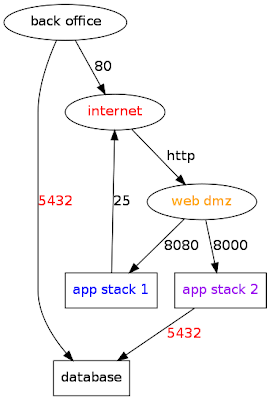 Quite a few things have happened here. Looking at the text, you will have noticed three lines starting with the word "option". These are basically just option names and values that get passed directly to Graphviz as global options.

The "internet" node was labelled "internet" and not "Internet". This is because ULG defines styles based on the first occurrence of the node or edge. Because we included backoffice.ulg first, it defined the style for the internet node. This also means that once we have defined a node, such as the "(web dmz|orange)" we ignore any style characters and simply use the label. The next two occurrences were referred to as just "web dmz".

Another thing you will have noticed is the use of colour. This is achieved by simply adding "|colour" to the node or edge label. Any colours Graphviz understands should be fine.

Its probably also worth mentioning at this point that ULG doesn't care about whitespace between nodes and arrows, so you can use spaces or tabs - whatever is easiest to read. It does however require that an arrow is made up of at least two line characters (such as == or --)

Other things you can do


Finally, this example shows the different combinations of supported node and arrow styles.


# This line is ignored

# Include a file
include common-opts.ulg 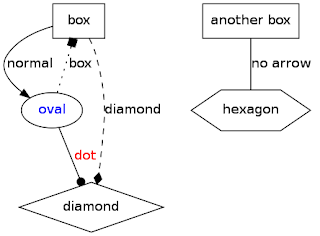 Hopefully this example speaks for itself.