The script below has been improved upon and can be found here: http://blog.0x10.co.uk/2013/04/passphrase-generators-part-ii.html

Passwords are dead. Long live passphrases. Or something like that anyway. As perfectly summarized by XKCD here http://xkcd.com/936/, passwords are hard to remember and easy to guess. Passphrases on the other hand are easy to remember and hard to guess.
To help generate passphrases, I've put together a little bash script.
Firstly, download the dictionary containing 10000 most common English words. If you have a 4 word passphrase, thats 10^16 possible combinations.
Now save the following script:
Using modulo on a random number? tut tut tut. Anyway, I've called this script make.sh.
Now run it, giving it the dictionary file and an output script name:
What it basically does is embed an array of words into ppgen.sh plus the code necessary to show passphrases.
It will look something like:
We can now run it:
Or, if we wanted to create just one 5 word phrase:

Firewall Builder (available here http://www.fwbuilder.org/) is a GUI that lets you configure a variety of firewall devices, for example iptables on a linux box or Cisco ASAs.

The idea is to take the configuration file from Firewall Builder and generate some sort of rule visualisation. The ruleset I'm using is basically just the built-in template called "fw template 3". I then saved the ruleset as testfw.fwb.

So, lets process the file:

Where the arguments are as follows:

Here is the result: 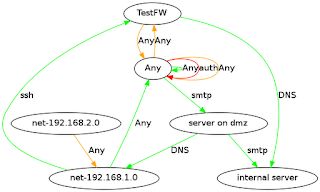 It isn't perfect, but it is a pretty good start. The colours are as follows:

So, here is the script so far. It's pretty ugly btw...

So, there you have it. More to follow as things improve.

Following on from the previous post, here are some functions for bash arrays. I'll add to this post later with more functions.
Test if a variable is an array:
Push values onto an array:
Pop from an array:
One thing to note is the clash between variable names. E.g. if you wanted to return the value into the name variable, it would be bad to call that variable 'value'. local doesn't help here, best option would probably to use obscure variable names that are unlikely to clash.
Walk an array:
Now, a little play with those functions:
Running it gives us:
So that sort of works. Next I should add an array_indexes() and array_values(). Oh, and happy new year :D
Edit:
Added array_pop function.
6 comments: